Start slowly, don’t give up, and keep giving yourself rewards at the same rate. Don’t think that the miniature German Shepherd will just know what you want it to do.

The world has a lot to take in for dogs, whose noses are much more sensitive to smells than ours. Handlers have to get dogs to pay attention to them so they can train them.

How to train a German Shepherd puppy to walk on leash Start with the beginning. The German Shepherd puppy needs to learn the equipment, that the equipment means good things are coming, and that going to the handler earns a reward.

After that, it’s all put together for short bursts of movement that lead to long walks inside the house. Keep adding new things to do. The German Shepherd will keep learning new things.

Show the German Shepherd how to use the leash

Training a German Shepherd Puppy to Walk on Leash is a great video by Life With Puppies that shows how to introduce a puppy to a dog harness for German Shepherd and leash.

It doesn’t rush through the steps. Instead, it makes sure that the dog is comfortable and interested in each one.

Use treats and a happy voice to help the dog get used to the new things.

They have to be seen as good things about the German Shepherd’s life.

Show the German Shepherd how to get a reward.

Some people get a reward when they hear the word “good” or “yes.” For some handlers, it’s the sound of a clicker used to train a dog.

Bring the German Shepherd to yourself. 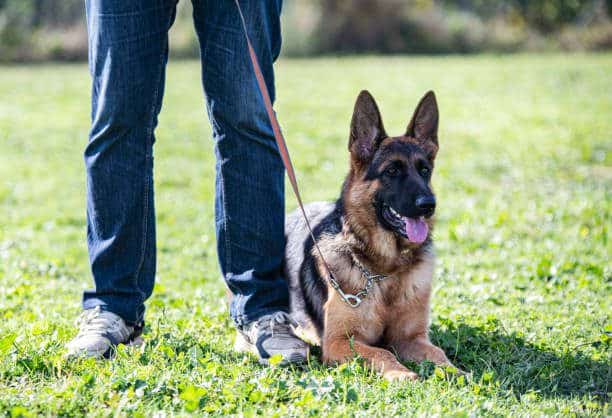 When it does, give it a cue and a treat. Take a few steps and the miniature German Shepherd will come back to you. Don’t let the dog take the lead, or it will learn bad habits.

Start slowly with the German Shepherd and keep going.

And also, let the German Shepherd puppy know the more chances it has to be successful and get a treat for it.

Stay on each step long enough for the dog to learn it. If the dog looks confused or pulls away, go back to the last step that worked. Also, make sure that sessions are short and upbeat.

Start to train your German Shepherd puppy inside.

According to Shepherdsense, Use treats and a happy voice to keep the dog’s attention, it connects the walks with good times.

Go outside and take a walk with your German Shepherd puppy

The real challenge starts when you go out into the real world. The handler can try to control everything, but things like birds, blowing leaves, and cars backfiring will always catch the attention of a learning dog.

Use words like “sit” and “watch me” and treats to keep the dog’s attention.

When new things are added to the dog’s world for the first few or even first few dozen times, the dog may go backwards a little.

This is also a good time to get your dog used to meeting new people and other dogs, so make sure they have good leash manners when they do. Slowly add new things to distract you.

How soon should German Shepherds start to learn how to walk on a leash?

Tell the dog that this gear means something good is coming by giving it treats and talking in a happy tone. Then keep going through the steps as shown above.

What kinds of tools should be used with German Shepherds?

Choke chains should never be used on a German Shepherd. According to Anythinggermanshepherd, to avoid these because the breed has slim nose and shorter tracheas.

This makes them more likely to have breathing problems, which choke chains can make worse.

Try regular buckle collars or harnesses that are made to fit the German Shepherd’s body shape.

The material should be strong to match the German Shepherd’s strong body.

Dog Collars for German Shepherds and dog harnesses come in many colors and patterns to match any style.

How hard is it to teach a German Shepherd to walk on a leash?

This breed is known for being friendly and getting along well with people.

According to the AKC, German Shepherds are also known for being stubborn.

This can make it hard to train well. When training a German Shepherd puppy to walk on leash, this is a problem that needs to be solved with patience, consistency, and rewards because it can end up with the German Shepherd acting weird.

What kind of walks does a German Shepherd need?

German Shepherds don’t need a lot of activity. They don’t have a lot of energy and find it hard to do much exercise.

The same source says that you should work out before you eat.

When full, this breed tends to get sleepy and would rather just lie around. Walks should be fun and give the dog and owner a chance to get to know each other.

What if the German Shepherd pulls on the leash?

According to Germanshepherddoghq, a no-pull harness can help you stop your German Shepherd from pulling.

Most of the time, though, you don’t need any special gear. A policy of “zero tolerance” is what will teach the dog that pulling doesn’t get him anywhere.

What if the German Shepherd tries to bite

When training a German Shepherd puppy to walk on leash especially in the beginning, a handler should pay attention to both the German Shepherd and the rest of the world.

According to Anythinggermanshepherd, to watch for signs that the dog is going to lunge and distract it before it can. Once the temptation is gone, give a reward.

How Many Puppies Do German Shepherds Have? See Here! 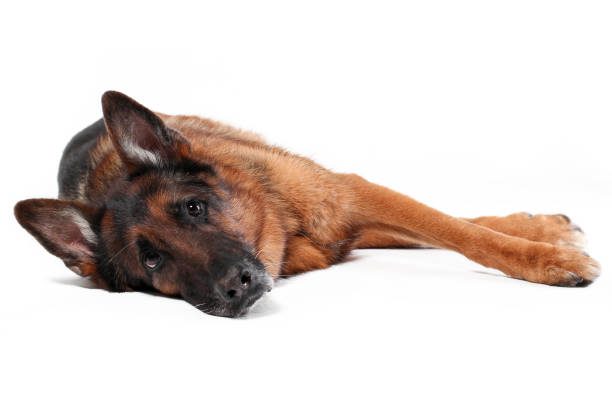 How Many Puppies Do German Shepherds Have? See Here!